This pandemic has been nothing short of a mazzaline if I’m being totally transparent and honest. I’ve done some technology re-jiggery, I’ve tried to change the way I do things and I’ve invested in things not knowing that I didn’t even have to do so in the first place -often realising that I could of jumped straight to the Omega rather than going to beta, gamma, phi and the like.

The Holy Grail of Portability?

I’m always intrigued by the technological advancements that are portable and powerful because I’ve always looked at my approach to things as a bit of a nomad -seeing myself as Ryu when it comes to my creativity, going where the inspiration calls and not having any barriers to it. I started my journey by being sucked into a random YouTube video… [to be continued]

This will be the point where I remind you of the change from an iMac to a MacBook Pro saga whereby my audio interface and Maschine MKI became obsolete in my setup due to the incompatibility with macOS Catalina. Also important to mention that at this time the Native Instruments put out a press release that the alot of their ‘legacy’ products would not be compatible with any of their software going forward and listed Traktor Kontrol S2MK2 as apart of that. With all that being said I was on the hunt for something different… 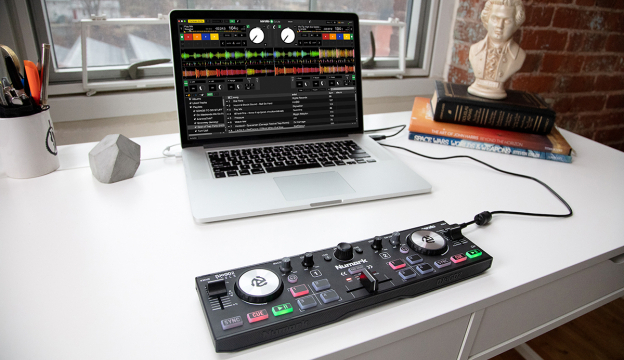 Soooo after watching nuff videos about a potential replacement for my S2MK2 that I thought I could no longer use, I gave in and copped the DJ2GO2 which was to be a far cheaper alternative to a digital controller at £70, and would also mean finally using the Serato software. The caveat here is that Serato is a subscription based software and I’ve never actually used it prior so I would have to dedicate time getting used to it.

After receiving it, I didn’t really have time to start using it so naturally the the 14day Serato Pro activation expired. When I eventually did start using it in the Serato LE mode being able to trigger the cliché sounds that everyone uses like foghorns and sirens etc was a novelty but overall I was quite underwhelmed. I feel like its a great piece of kit if you’re a DJ whose style is to just play tracks or do a few fade in and outs but I feel like if you’re trying to do a bunch of other stuff like looping, cuts, filtering and you use FX you’re going to have to get used to referring to your screen and using your trackpad. I could definitely do with more pads and buttons, I could also do with more patience to get to know the ins and out of Serato Pro and more features of the controller combo buuuut…

I found the Serato experience incredibly uninspiring in comparison to Traktor. I admit that my history is a longstanding Traktor user since purchasing the Numark Omni-Control back in 2010 [before a group interview in Central London which i trekked to all the way from Kilburn holding a mahooosive bag with the controller in it]. Also after slowing down DJing activity at the top of 2018, I feel like it would’ve been nice to have the extra buttons and functionality that the S2MK2 affords me. Since getting it back in May 2020, I’ve probably used it only a handful of times. Also on the DJ2GO2 controller, the soundcard is pretty much a 3.5mm output so it can feel a lil limiting at times.

Originally my intention was to use this to potentially stream or record using OBS and Twitch, have the odd mix when I create an edit here and there but I found the ergonomics of it such a faff. It was actually long and throughout owning it I found out that the S2MK2 was compatible on MacOS Catalina with the free Traktor DJ software, bonus being that it’s also compatible with Traktor Pro 3 too. All these revelations made me think that rather than spend £70 on a new controller and a total of £33 on a monthly app subscription, i could’ve just paid £44 for the Traktor upgrade.

I’m not too cutup about this because technically I always wanted to demystify my Serato intrigue and also I wanted t see what it would be like to use a small controller. I even put my S2MK2 up for sale on Facebook marketplace but after a few dozen generic messages and people trying to barter, I’m considering keeping it and upgrading to Traktor Pro 3.

If you want to learn more about the DJ2GO2 Touch, see the video click here.